I was pregnant with my first child and my husband and I decided not to find out the gender. However I did know, I wanted to have my little ones name up on the wall over the crib. When Marilenna was born, I was more then excited to get that done on a few hours of sleep here and there. Earlier, we had registered for gender neutral bedding and I decided to also purchase separately some of the matching wall decals. These days nursery decor sets come with every last detail in mind. Although I suggest you don’t buy everything in sight.  Pick some pieces and from there check out other stores for more items and ideas.    However today I’ll explain how I went about displaying my daughter’s name up on the wall and using decals as wall decor. Since I already had the decals on hand, I then went to Michaels and picked out block letters.  Size and style is important so choose accordingly, make sure there is also enough surface area on the letters.   Once home I carefully selected certain decals that displayed well on each letter. I purposely placed some decals over the edge and cut the remainder off. Once I was done that I took my double sided tape and placed it all over the backs of each letter.   I picked a starting point on the wall and made a light dot with my pencil.   I then grabbed my level and the first letter of her name.    I removed the protective layer off the tape and proceeded to place it on the wall while using the level. From there I went on to the next letter using the first letter as a guide. 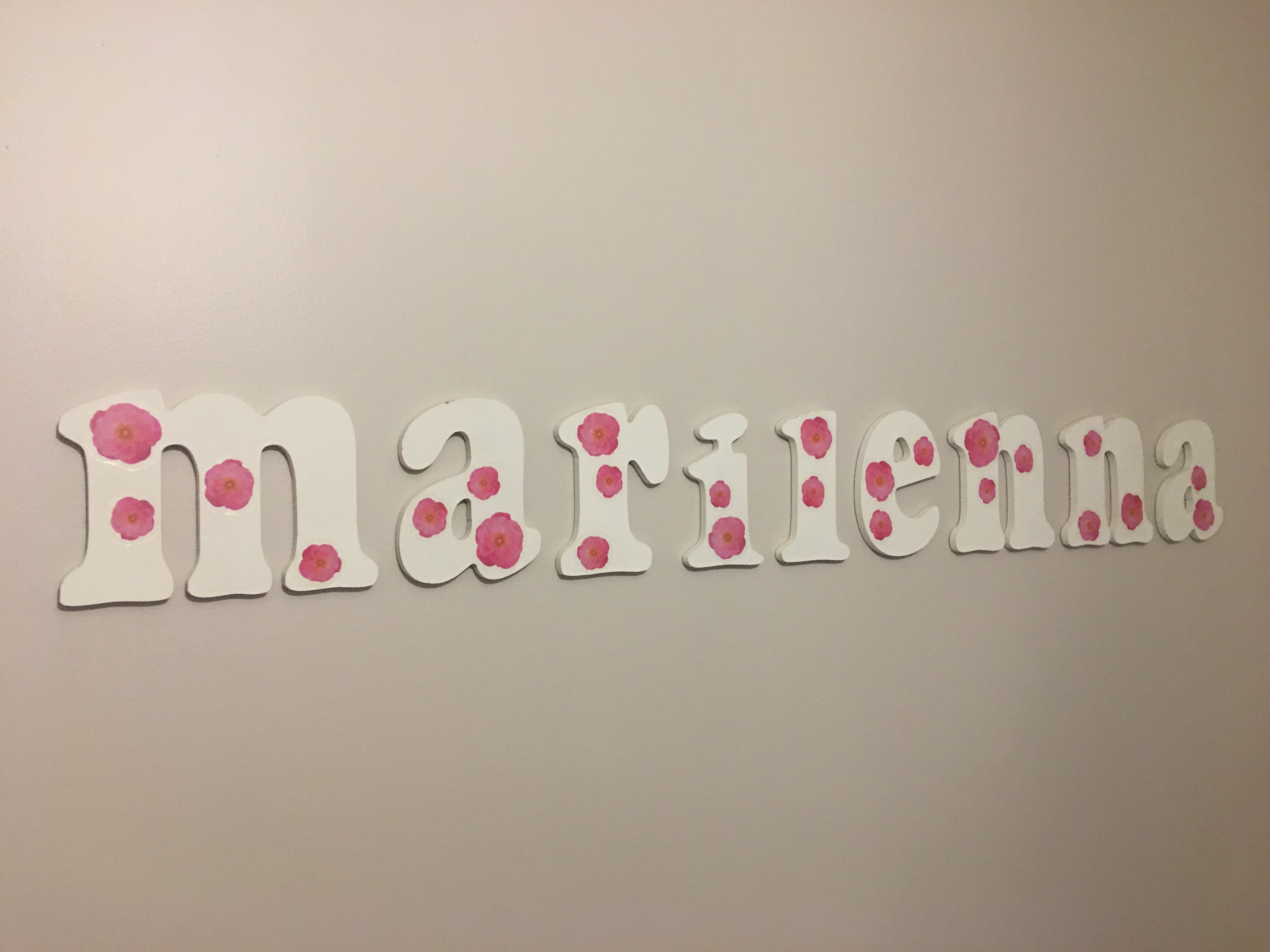 When I was expecting my second baby, I decided it was time for Marilenna’s room to get a fresh new look. I had some pieces from her baptism etc. that I put aside knowing that sooner or later I would use. Since the items had variations of pink, I didn’t want to display them at that time with her nursery decor.  One day I was at IKEA and came across some wall decals that had pink flowers and I just knew I had to get them. I picked up two packages and used the flowers to decorate her name once again.   I simply had to peel off the old decals and just add the new ones sparingly. 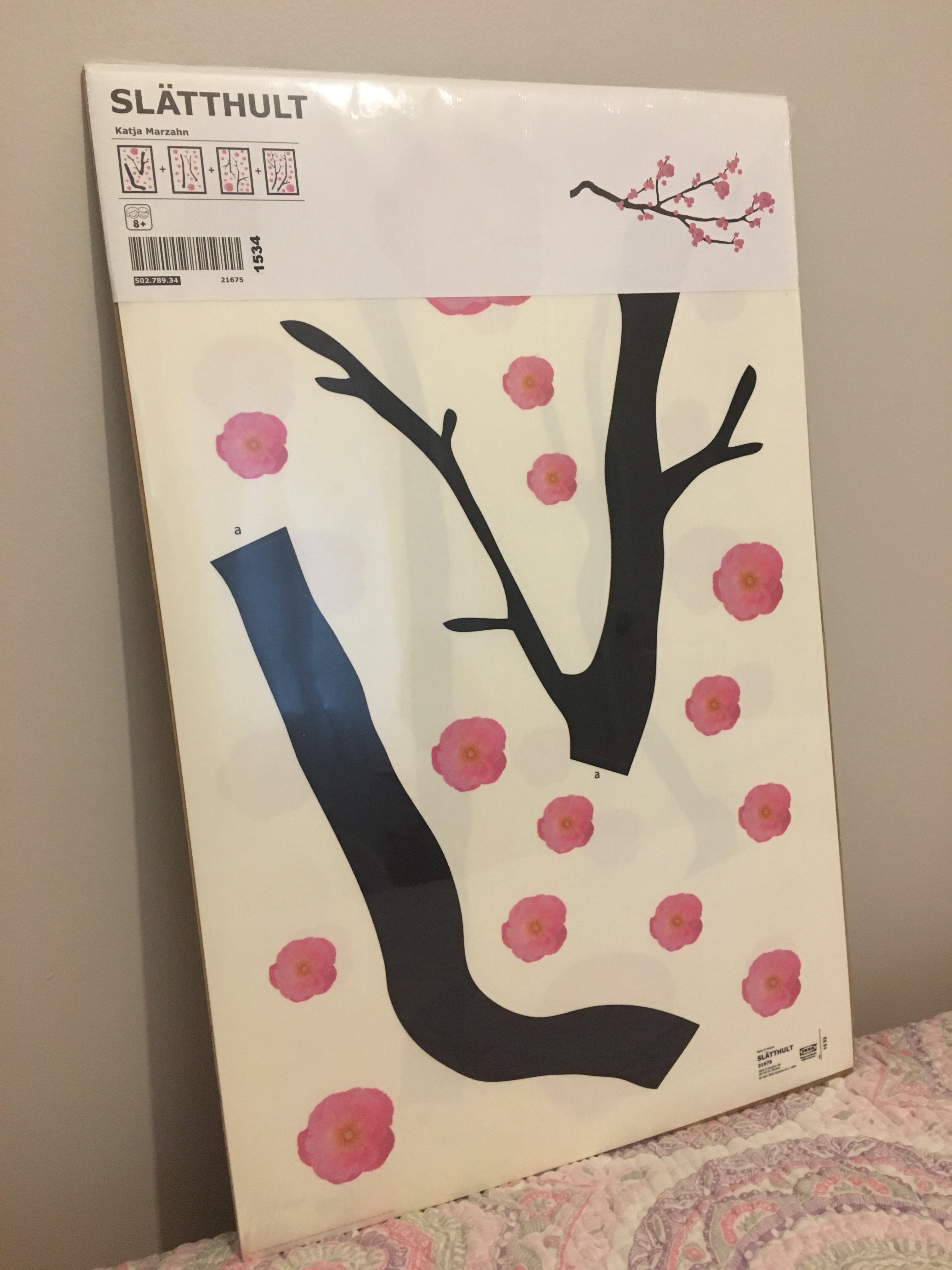 I also used some flowers to decorate an existing tree decal in her room and a light switch. In the end all these extra touches gave the room a new theme that was perfect for a little girl. 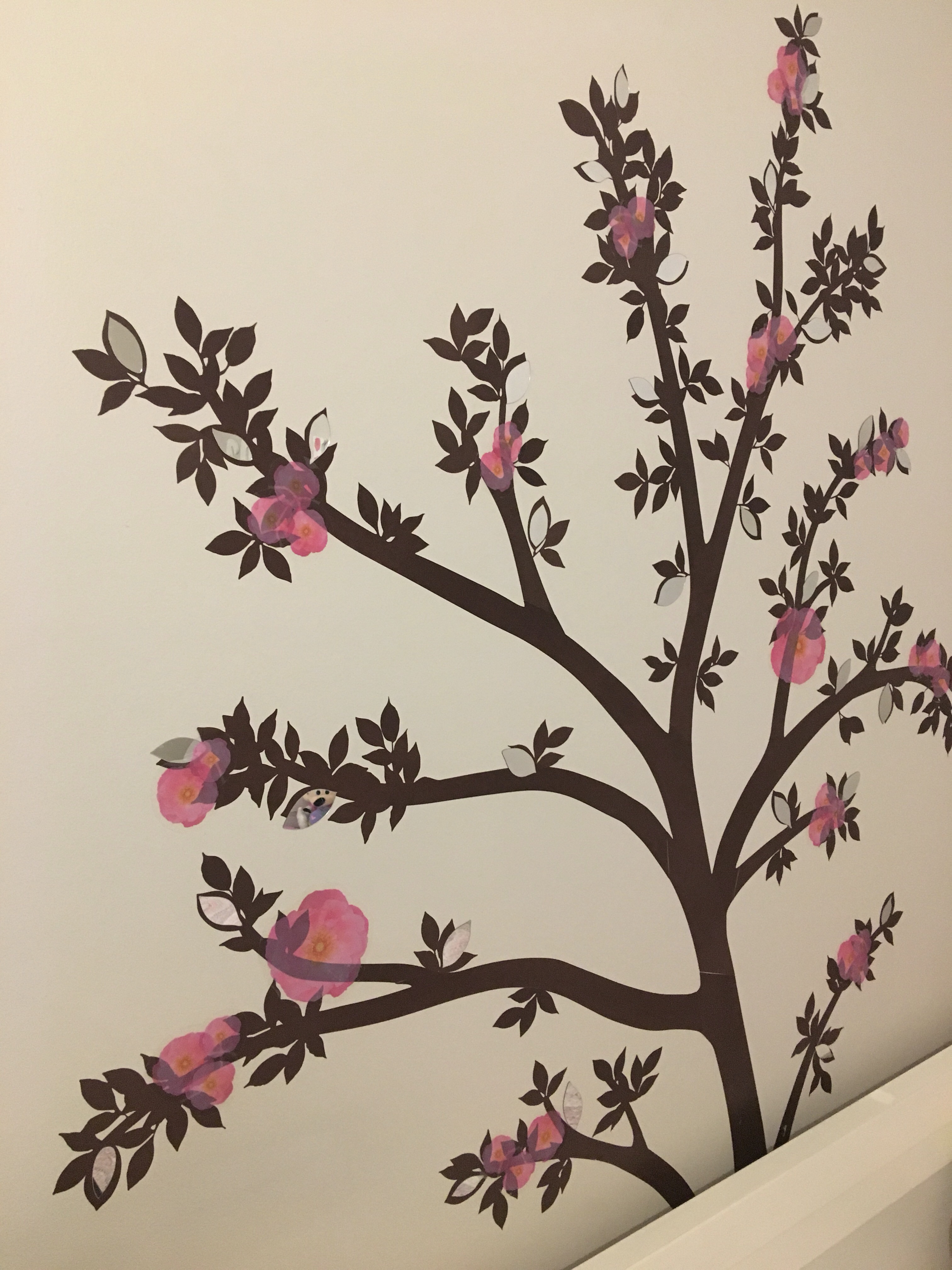 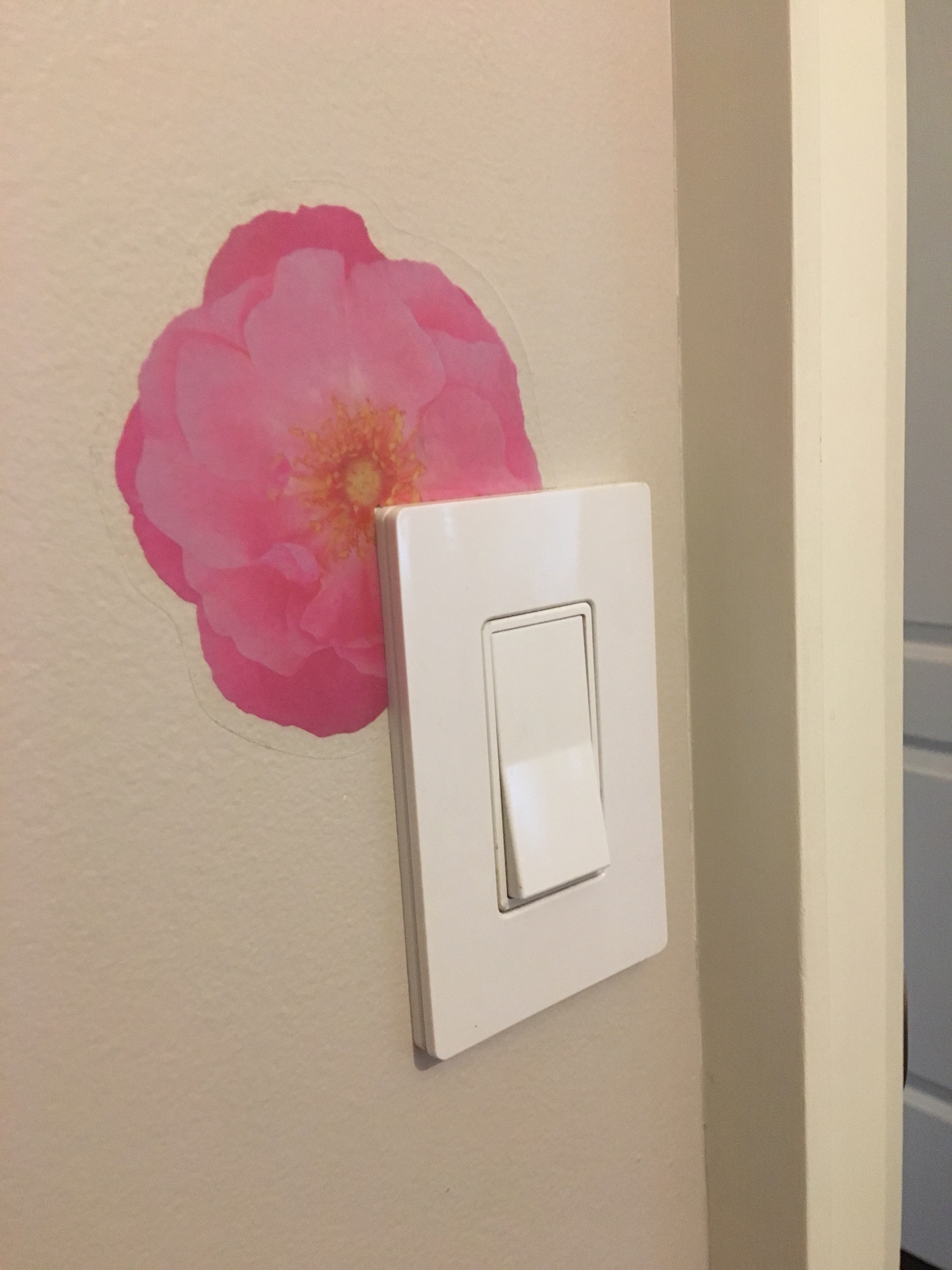 I ended up using the tree branch from the decals in the new nursery. I found sparkly flower stickers at Michaels in the colours I wanted to match the existing bedding that was handed down.

I couldn’t resist but to once again display my little ones name up on the wall. However another option could of been to use an oversized initial instead, that would of worked just as well.   Unfortunately, I couldn’t find block letters I liked at the time so I opted for these.   Truth is, I’m not exactly satisfied with the outcome but for now it will do.   I look forward to giving Ilianna’s room a fresh new look some time soon. 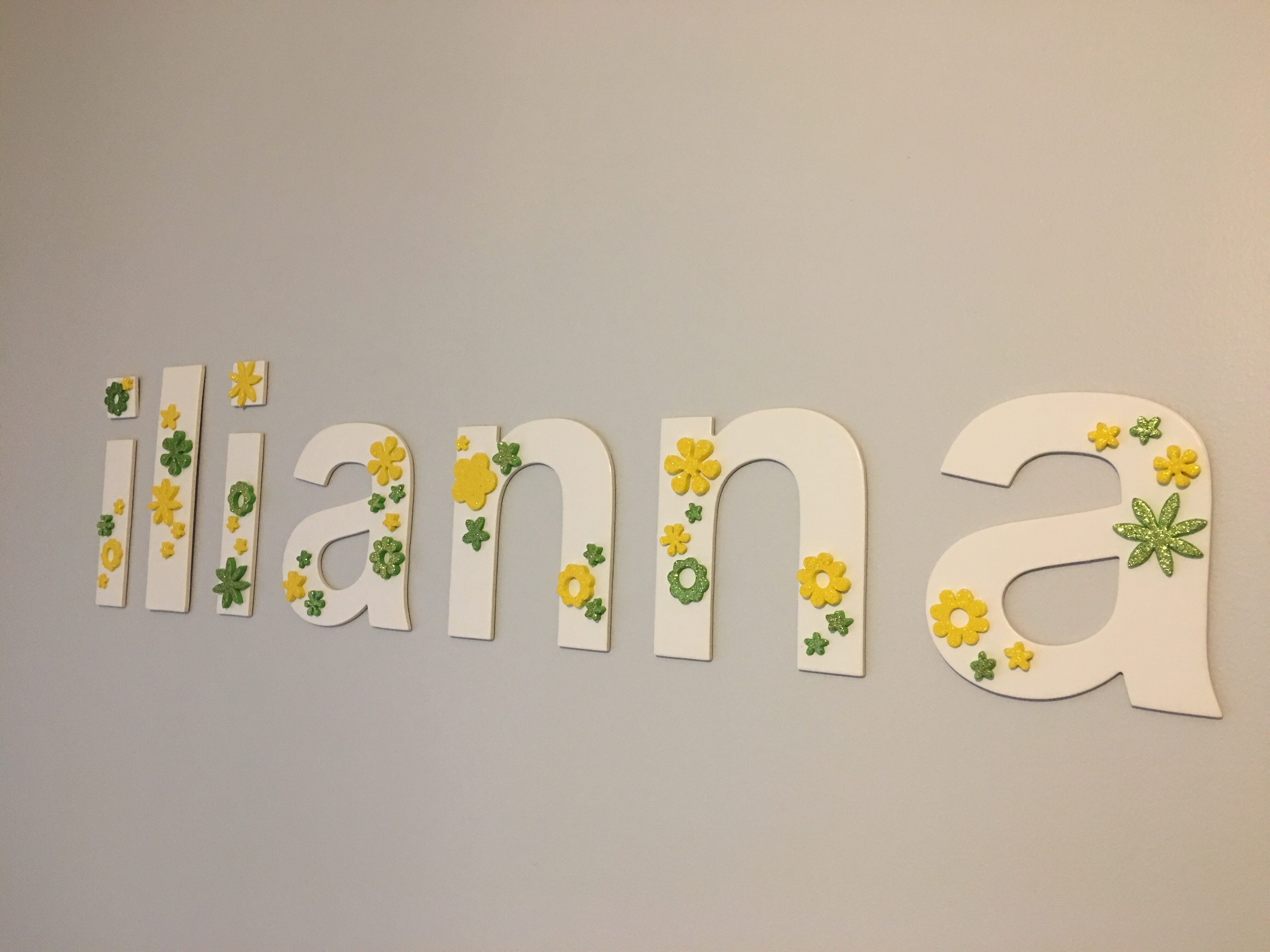